Published by Stephen Dann in Innovation · 15 February 2021
Tags: innovation
New ideas are extremely vulnerable in most organisations. The natural tendency is to kill anything new because it does not fit with the established way of thinking or the usual way of doing things - so we tend to reject them. Further new ideas are only partly formed, clumsily articulated, riddled with inconsistencies, lacking detail, unproven and un researched - so are quite easy to knock down.
On top of this, "frazzled" executives already have overflowing "to do" lists and anything new is going to mean more work – so new ideas are seriously unwelcome.
New ideas and innovation often challenge existing profitable business activity, so organisations tend to delay for too long. Kodak invented the first digital camera but continued to be a "film" business until it was too late, and it was destroyed by its own invention.
The 9/11 attacks were predicted by two separate FBI agents - their ideas were rejected as hunches because they did not fit with existing thinking and they could not prove them. Had these ideas been progressed or even just connected, history and many lives might have been different.
So new ideas need to be nurtured and developed ("green-housed") carefully - often best in a separate team away from the day to day maelstrom.
Crazy ideas and hunches can change businesses radically, managing them properly can change the world. 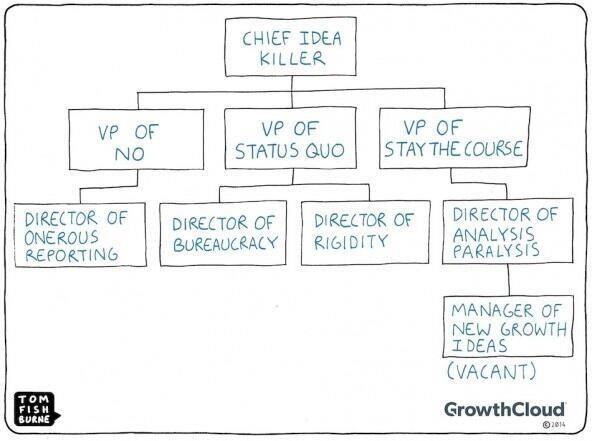